Mikey In the First Person Needs to Chat

Just back from a quick little vacation, I find myself all mellowed out, relaxed and eager to get back to glass work. All seems right in the world, heck I even stopped kicking the cat, and an even bigger indication of my relative calmness- I no longer feel obsessed to pick on Gary Brown... until I reviewed the status of supplies and purchasing with the staff while I was away.
Gary Brown comes later...
Before I start, I'm compulsed to offer a diversion, a nugget if you will, of some quirky yet interesting human behaviour, something that might one day aid the youth of today to help prompt some provocative conversation at the local cougar bar. Nevertheless, said story offers the perfect analogy to the situation I found myself returning to on April 16. It offers a strangeness that cannot be explained, an aberrance just as we find in the 2% American Dollar surcharge still being imposed upon you and me by our OOCSGS, an analogy so accurate and on target- one that might sometimes just make no sense at all.
We begin;
In the Bernese Oberland, the heartland of Switzerland, at the mouth of the Simmental Valley, a mere hour from Gstaad, I found myself meandering along a winding Alpine valley road last week, only to come across what you see below.
That's right.
You would be correct if you thought it to be a Swiss military firing range... 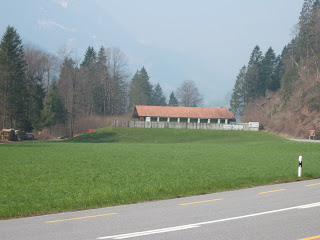 Being somewhat surprised by this seemingly random military outcrop, I reconsider the amount of Kirsch that my host must have put in the cheese fondue last night (the trick is to dip your bread into a glass filled with Kirsch first), only to suddenly turn my head in the direction of gunshots. Yes, that's right, the picture below is of the targets the Swiss military are shooting at. 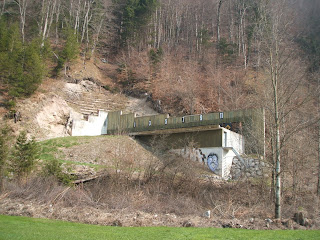 Of course, as you weren't there, but safely in your Snuggie Blanket with Sleeves, watching the latest episode of Modern Family, you might not have noticed that the highway I was actually driving on happened to bisect the two. Picture still a little blurry? That meant that target practice happens over the heads of those who might traverse said highway. That's right folks, your humble servant literally had to duck gunfire to return home to you.
Of course the fact that this actually happens and is regarded as normal to the Swiss, to us makes no sense at all. Sort of like the hockey playoffs running into June, or imposing a U.S. surcharge on goods when the Canadian dollar is higher.
But it happens- here's the proof;
When I came back to Toronto on April 15, I was given the news that our OOCSGS still is charging a 2% (actually 1.9%) surcharge on a Canadian dollar while our dollar has in fact been worth more the the American dollar.
And from whence doth such knowledge of the Canadian dollars superior value come from you might ask?
Well, direct from Canada Customs Clearance my gentle folk, as that's strangely where I found myself that very next day.
You see, having been suitably offended and felt taken advantage of like some sheep herder's maiden, I took to my steed and drove down to the U.S. (actually I'd run out of Aleeve and bourbin- you can't get bourbin in the Swiss Alps) and found, after placing a U.S. order and doing the Customs Clearance myself, the exchange rates for the week prior as copied off the Canada Customs office whiteboard (pictures not allowed) to be as follows- 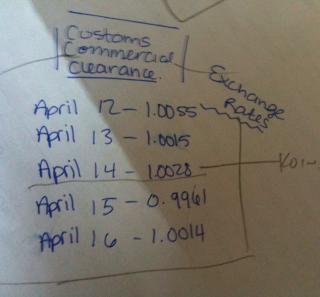 As you can see, if anything, our OOCSGS should be offering a rebate due to the Canadian dollars higher value, not the inverse. 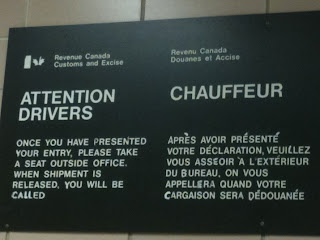 (above picture provided only as a public service so you all can see our federal dollars at work, or how I felt like Arlo Guthrie in Alice's Restaurant, sitting on the bench at the government office)
I wonder if OOCSGS understands that while 2% might seem insignificant and easily buried into the price of goods, it is the lack of sense of fair play that is what truly offends. And this therefore encourages us to search elsewhere for supplies, not just for the savings, but on principle, as no one wants to feel that they're being taken advantage of unjustly.
We too import goods. We too know exactly what the cost of goods are. We know that Kokomo came in on April 14 when the dollar was $1.0028 and was going to come to us four days later meaning it would be cheaper, but regardless our OOCSGS felt it still needed to add their 2% surcharge without basis.
On April 23, 2010, the dollar was virtually at par...
Posted by Mikey Figgy at 14:16

I do not understand the thought process of the people running that place. It is not just this US surcharge on a par dollar it is the lack of stock. So this lethal combo is going to keep small business closing and customers continually unhappy.

I thank you for having the courage that many of us in the industry don't have and speaking out loudly on this subject.

My fingers are crossed for that rebate but I have a feeling with how that place is run it wont happen..

Hi Mikey,
I'm amused by your comments on the shooting range between Wimmis and Oey in your post. In fact, it is not used by the army itself. But as everyone in the army has to do a least one shooting training outside the militia refresher courses per year, we need quite many of these shooting ranges - some of them even crossing roads :)

Thanks guys for the additional info!
Mikey