The time has now come for Mikey to reveal the true purpose of his retelling of the story of Swiss Cheesed Glasswerks, a line of glass so magical and mysterious as to inspire awe in all those who cross it's hallowed threshold. As if merely retelling the story wasn’t good reason enough...
It seems that the executive board of Fantasy In Glass (read Pat) has been investigating ways to generate additional revenue and recently decided to offer for sale the naming rights to it's building and facilities here in Toronto's west end.
The Fantasy In Glass building (located at 703 The Queensway) is arguably the most recognizable commercial building in Southern Ontario, often serving as the centerpiece of the Etobicoke skyline. That’s why the naming rights for the building, when recently put up for grabs, generated significant interest from companies from all across Canada.
Mikey Figgy, current president, property manager and assistant janitor for this popular glass emporium, said that after advertising the building’s naming rights availability he noted that there was an onslaught of enquiries.
“The naming rights of this magnificent neo-classic 2-story building that sits just east of the intersection of Royal York Rd. and The Queensway would offer instant local and national recognition,’ he said.
“Signage of this building is an unparalleled marketing device. I really didn’t think there would be a blank fascia for long, and of course, I was correct, once again.”
“We’ve had all manner of businesses approach us, but one company stood out, head and shoulders above all others- and that company is Swiss Cheesed GlassWerks, one of the most respected and revered glass manufacturers producing glass today. A line of art glass originally influenced by the musings and wishes of Mikey, president of FIG Inc. and was just recently written about in The Diary of a Demented Store Owner.

That’s right folks, effective immediately, the building at 703 The Queensway, currently occupied by Fantasy In Glass, will now be officially known as 'The Swiss Cheesed GlassWerks Building!'
Appropriate signage identifying such has been put in place to reflect this great honour.
This agreement does not include various other possible licensing agreements in the future, such as contracts known as "pouring rights" for drink manufacturers.
Contrary to rumours, Mikey has not accepted a proposal by Gary Brown to rename the blue Denver kiln in the kiln room 'Brownie'. 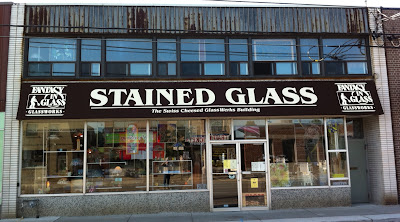 Many times I read your blog I am amazed, amused and awed, but this time you have just plain confused me.

Phone me Doris and I'll explain it all to you...

Well aged and smooth,you, sir, are one cheesy mo-fo

Sir: I must say that my nephew, Gary Brown (no "e") is most disappointed at the rejection of his generous offer for naming right of the Big Blue Denver Kiln.

"Uncle, why is Mikey being so mean? I offered him North Dakota in exchange for naming rights. Just think how everyone would flock to FIG in Canada after having read about 'Fargo, Fig'?"

I must agree with my nephew (still no "e"). If he had, say, offered Alabama your hesitation would be understandable. North Dakota was a fair and reasonable offer. Please reconsider.