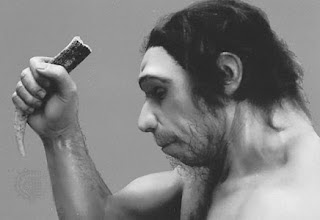 The most significant discovery in Mikey's career was entirely serendipitous. Last April, the stained glass store owner was hiking in Germany's Neander Valley when he tripped over something on a trail. Some quick digging exposed the obstacle as the tip of a mastodon tusk. But it wasn't until a few weeks later when the entire tusk was unearthed and dated that Mikey realized the magnitude of his find. The tusk, he believes, is actually a Neanderthal glass cutter. Mikey calls it a Neanderthal "toyofigus." Like the grozing pliers discovered in Slovenia last year, the fact that the 50,000-year-old toyofigus predates the presence of glass makes it even more perplexing.

A carefully aligned hole starts at the top of the cutter and runs its entire length. "I think a Neanderthal master craftsman must have used a stone awl to hollow out the toyofigus," says Mikey. This cutter, he says, proves that while primitive man made and used tools, more importantly it suggests that Neanderthals used a cutter lubricant proving they were concerned with cutter wheel longevity.

While digging out the tool, Mikey uncovered the entrance to a cave and another major find: the first example of Neanderthal cave stained glass cutlines. Fittingly, the cutlines show lamp and suncatcher designs alongside proposed formulas for actually manufacturing glass once fire is discovered. "Maybe what we have here is the birth of a new hobby and artform."

Mikey theorizes that the Neanderthals' fondness for stained glass may explain why they vanished some 30,000 years ago. "Maybe their frustration at not actually having any glass to cut scared away all the game. They would have produced an awful racket all over the place complaining and arguing over whether Bullseye artglass would continue to be as popular as it is yet to be."
Posted by Mikey Figgy at 14:53