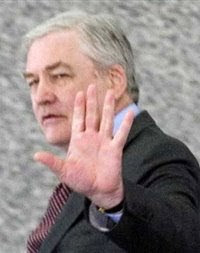 Conrad Black says that he’s adapting well to life behind bars and doesn’t expect to run into any problems while serving his six and a half year prison term in the United States.
“I’m doing fine.” Black (or BU#0100 as he’s known to his friends) said in an interview with Mikey, president of Fantasy In Glass, from his Florida prison. “This is a nice place. They have Taurus 3 bandsaws (‘hey Mikey- no Ontario Hydro stickers needed here buddy’), lots of copper foil and a steady supply of glass from all the manufacturers, and while the stained glass course I am currently enrolled in is definitely inferior to those taught at Fantasy In Glass, I find that here we have none of the supplier problems like those I have experienced in Toronto”.
Black gave his first and only exclusive interview to Mikey because he saw Mikey as a kindred soul who has been just as outspoken as he, whose ongoing commentary to the media throughout his trial often angering prosecutors.
“While shopping at Mikey’s store was always heavenly, what with over 1500 colours of glass, about 10,000 sale squares, and the most complete selection of Bullseye fusible and System 96 glass available anywhere in Canada, and while Mikey seemed relatively immune to the current monopolistic wholesale distribution system problems that seemed to be affecting others, I do know it was often a chore to secure stock for his customers- often with his having to order truckloads from the States to keep them happy”.
“While I do miss his bad jokes and clean relatively well-stocked store, I am fortuitous to now be spending the next few years in a facility that is serviced by a healthy, competitive, free market environment. I am secure in the thought that this is a place where both Ed the Cat and Jim Matthews can both smile, along with my current bunk mate Gary Brown (BU #0203).
Posted by Mikey Figgy at 12:24

I tell you, I was framed! That said, Mr. Black (Oh, but the Florida Dept. of Corrections does have a sense of humour, don't they?) is a reasonable enough bottom-bunk cell mate.

It's that continuous whining for Fantasy's Fabulous Selection of Dichro that grates on me. He's in PRISON, for Ghu's sake. He should learn to live with irid's and be happy with it. I mean, the next thing he's going to be wanting is a diamond flat lap. What? Diamond hand pads aren't good enough for him? So, yeah, they take longer. Is he going someplace soon? I don't think so.

PS. Don't tell The Dot that Lani has promised to bring me a cake with some breaking pliers in it so I can snap out of this joint. I've discovered that the so-called "security" windows are only BE 001101-0030.