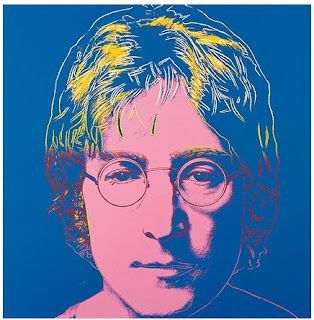 New York, New York - Yoko Ono, widow of slain Beatle John Lennon, claimed today that "my John" had foreseen the introduction of many of Bullesye Glass’ pending new colours over the years, before they were released and even more shocking- even before the formation of the Bullseye Glass Company. The latest colour correctly foreseen by John is their new and exciting Aventurine Blue. This assertion for predicting the production of BU#1140, which has shocked everyone in the industry, is based on an early, unrecorded version of a song that Lennon wrote in 1967, 13 years before his untimely death.
Ono unearthed the song while "rooting through a few drawers". Underneath an old Spectrum Glass stocklist, she discovered the song, recorded on a portable cassette player, entitled "Yer Blues" that predates its release on the Beatles’ White album (a reference to Bu #0113 no doubt).
"He just loved that colour and how it sparkled and made him forget about his less talented song writing partner Paul (letters to Ed at fig@fantasyinglass.com)".
"Many a night John and I would stay up, recording our own music, just the two of us ( you know, the really good stuff like Two Virgins), influenced by colours such as Aventurine Blue, never having yet been invented" she reminisced.
Famed record producer, Phil Spectrum exclaimed, “For all those years up until his tragic death, John waited anxiously for that day when Dan, Boyce and Ray at Bullseye would listen to his music and finally realize John’s dream and develop this colour.
Scientists have dismissed Ono's claim, stating that at the time of Lennon's death, the glass community was preoccupied with finding a really nice Honey Opal . One journalist, with no interest in stained glass, asked Yoko "Is it not obvious that McCartney was vastly more talented than your late husband?" and was told "Do you see any songs written about System 96 colours? Or any about Slumpy's fusing molds? Besides, what do the songs say eh? Lennon/McCartney. LENNON/McCartney, THAT'S what they say. McCartney never even foresaw the proliferation of reasonably priced Coneart kilns".
It’s also speculated that Lennon foresaw Bullseye’s manufacture of a line of rods for torchwork when he wrote a song with the working title of ‘Give Beads a Chance’.
Posted by Mikey Figgy at 14:39