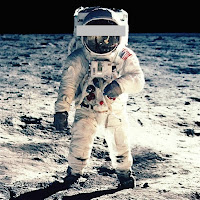 NASA administrators continue to strongly deny that there is a stained glass store on the moon.
Recent pictures have been circulating on the internet and purport to show the reflection of a long chocolate brown coloured awning with the words 'Stained Glass' inscribed on it in the helmet visor of astronaut Buzz Aldrin (see censored photo here), lending weight to conspiracy theories which suggest that the U.S. space agency faked the 1969 moon landings in order to divert attention from the Vietnam War and the increasing price of Bullseye kilnshelf paper.
Sceptics have long claimed that photos of the alleged lunar landing which show shadows facing in the wrong direction, coupled with the awning reflection seen in Aldrin's visor, suggest that the event was faked by NASA and the reflection seen in Aldrin's visor proves it was staged in Toronto, Canada.
Conspiracist Gary Beige has documented proof that Fantasy In Glass Glassworks, a stained glass emporium of some note, has been based in Toronto for several decades and yes, while out-of-this world, it has never been anywhere but Toronto, more specifically on The Queensway in the Swiss Cheesed GlassWerks Building in Toronto's west end.
Mr. Beige claims that two employees who worked there disappeared shortly after in mysterious circumstances and that they have yet to be found.
Said Brownie, "The problem is that stained glass craftspeople are scared to talk about this - too many of their colleagues have been silenced over the years."
Canadian Space Agency sources scoffed and pointed to the timing of the story. "This is malice put about by opponents of the United States' plan for a Lunar Moonbase and a colony on Mars and the revival of lead came in stained glass".

Were the employees probed before or after their abduction?