True Gold-Pinks and Gold-Purples are perhaps the most sought after colours in stained/fused glass. They are also unfortunately the rarest and most expensive of all available colours. Your job, should you choose to accept it is to continue reading and find out what all the mystery is about when it comes to making and using true Gold-Pinks and why people go through all this trouble and expense.
There are all manner of weird and wonderful things some glass chemists can put into glass formulas as colourants; for example, to get a nice plum-pink, Purple Gourds from the Albania foothills work quite well (only if picked ripe and in season... Ever Helpful Vanna Opal). However conventional scientists are less daring and creative and will resort to science and use manganese and cobalt to get these colours in transparent glass. The one problem with this is that when you look at glass made this way under incandescent light the colour shifts to brown. We hate when that happens.So, what to do? It seems while melting down some of Aunt Edna's heirlooms we found out her diamonds couldn't cut glass 'cause that's what they were made of (seems Aunt Edna was just as lacking in scruples as some others...Ed) and when it mixed in with the molten gold, we got a really cool Gold-Pink coloured glass. It seems we had accidentally discovered that gold is the only element which provides the glassmaker with the exact colouring properties to create true hot-pinks, cranberry and purple tones. And most importantly, colours that are enhanced by incandescent (lightbulb) light in both transparent and opalescent glasses.But why gold? Here's where it gets kind of technical, so hang on. Colours in glass are created by the selective transmission of narrow parts of the visible spectrum of light. To get a hot pink or grape purple we have to be able to transmit some light from both the red and blue ends of the spectrum at the same time while simultaneously absorbing all the turquoise, green and yellow in the middle of the spectrum. Gold is the only thing that can do this miraculous feat (Mike never tried, but probably could too!)Gold combines together in relatively small non-crystalline particles of thousands or millions of gold ions (for techies we call this a colloidal colourant). The final size of these particles determines the colour we see. The gold ions have to travel through the glass as it cools and stiffens. If they migrate too fast, the particles get too large, and we get brown tones. If they move too slowly, they remain so small that little no colour develops at all. Ah, the trials and tribulations of melting down Aunt Edna's jewelry! What's a thieving chemist to do? Hey, those candlesticks of Aunt Edna's that were on the mantle, aren't they made out of lead? Perfect, let's see if they help. Seems lead is universally used to control this migration rate, and thereby the colour of the Gold-Pink (worry warts take note- all glasses we carry pass environmental tests for leaching- the lead is bound tightly into the surrounding glass and does not leach out- not the case when Aunt Edna's candlesticks were out in the open ready to instantly poison innocent unsuspecting women and children).So, if you're making a lamp and need real pink flowers, the only way it will really read true under incandescent light is if it's made using gold! That explained why I needed Aunt Edna's jewelry- it was done for your benefit!

By the way, manufacturers actually buy and use real gold, usually in the form of Krugerrands dissolved in Aqua Regia. 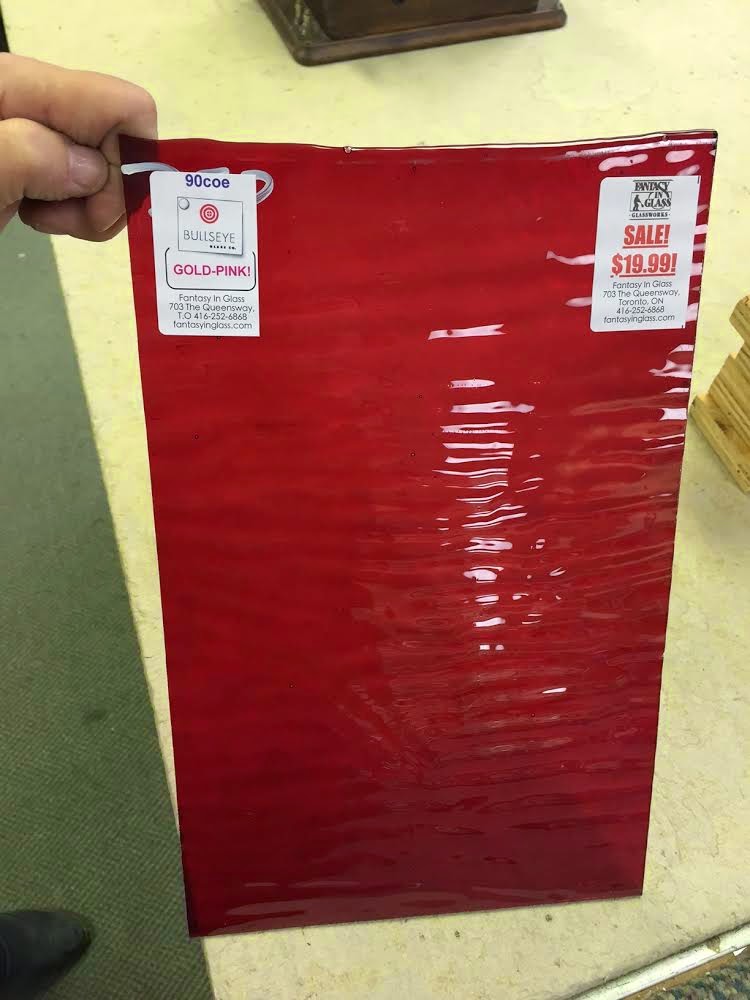 And as a test, Mikey has pulled out some of his private reserve of Bullseye Glass in Gold-Pink, Gold-Purple and Coral Pink in both fusible and non (same price for either) at about 1/3 the current market cost- all in one little box all by their lonesome...!
Posted by Mikey Figgy at 14:19